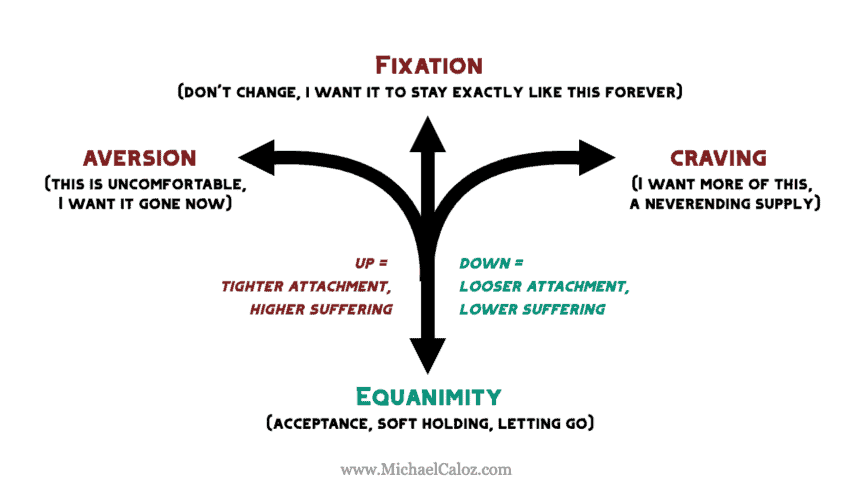 This is one of the most important lessons I learned recently on my 10-day silent meditation retreat.

Imagine any possible situation where you’re not feeling emotionally good.

Maybe your partner left you, or your big project at work failed, or you went to make coffee in the morning and remembered you forgot to buy milk.

No matter what the painful situation is, one of only three possible things is happening:

That’s it. Every negative feeling boils down to one of those three.

When you’re feeling bad, this framework can help you explore that feeling more deeply and get to the root cause.

Say you’re sad or frustrated you didn’t get that promotion at work. You might frame it in several ways:

You might have noticed: All are sides of the same coin. Now, what do they have in common?

In each case, the real problem is that you’re strongly attached to a certain outcome. You want things to be a specific way (even if you have little control over the situation).

So what’s the opposite of that?

Letting go. Accepting things as they are — not as you’d like them to be.

Don’t get me wrong: You’re still allowed to have preferences and desires.

But notice the difference between “strong attachment” and “equanimity”:

Attachment (fixation/craving): “I can’t function without coffee. The most important thing in the morning is to get my fix — it’s my non-negotiable ritual. I absolutely cannot fully wake up until I’ve had it.”

Equanimity: “I love coffee. I look forward to it in the morning. But if I run out sometime, it’s not the end of the world. I’ll just have tea or something else instead.”

Attachment (aversion): “I hate this person at work. They’re such an idiot. They make my life hell and ruin every project I’m on with them.”

Equanimity: “My co-worker can be pretty challenging to deal with. I often feel tension in my body around them, so I try to take care of myself by taking deep breaths.”

Attachment (craving/fixation): “If my partner left me, I’d be completely devastated and could never recover. When they’re out with friends, they should text me regularly so I know they’re thinking of me.”

Equanimity: “My partner is so important to me. I want them to enjoy their time with friends, and I also want to appreciate every moment the two of us have together (who knows when it might end).”

Now, practice noticing whenever you feel bad in some way: Are you experiencing too much attachment (i.e., craving, aversion, or fixation)?

Can you move toward more equanimity instead?

To reduce your suffering in life, practice attaching less firmly to specific outcomes.

The problem is not that you have desires, preferences, and goals.

The problem is STRONG attachment to things being different than they actually are — especially things outside your control.

Here’s the easiest way to practice all this day-to-day: Notice if you’re “squeezing.”

Those three point in different directions, but they all feel like squeezing. So the opposite of all three is letting go.

Do you feel agitated? Look for tension in your body. Is your jaw tight? Your shoulders? Your gut?

Where are you squeezing?

Maybe it’s more in your brain. Does it feel like you have too many thoughts squeezing together? Like you’re pressing your mind hard to think of a solution to a problem?

All of that is causing you suffering.

How can you relax and let go, accepting things as they are?

You’re allowed to have goals and preferences, but hold them loosely. Who knows what the future holds?

Yes, point yourself in a desirable direction. But practice acceptance and equanimity when you stumble along the way or if the path changes unexpectedly.

And yes, sometimes it makes sense to fight against the river current.

If injustice is happening, if others are suffering, then yes — maybe the right thing to do is engage your muscles and push against resistance.

But that’s at the macro level. At the micro level, keep practicing releasing and relaxing. You’ll be more effective at fighting the larger current if you’re not strongly attaching.

When the game clock is counting down and it’s up to you to make the winning throw, will you be more successful if you’re relaxed or tense?

Take some deep breaths, calm your body, and let go of any specific outcome. That’s how to win.