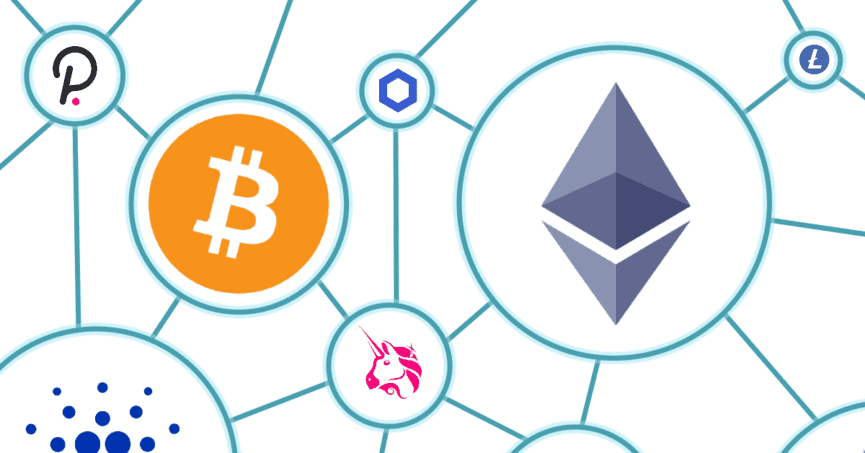 This is part 24 in my cryptocurrency educational series.

3/4 Update: Expanded the “Here’s where I’ve been beginning to focus my crypto money lately” section.

3/5 Update: Added a little more at the very end about the world-changing potential of crypto; and, added a few small updates to the StrongBlock section.

3/8 Update: Added one more bullet at the beginning of the section on where I’m putting my money lately, and added a few links at the end of that section for doing your own research.

This is my ninth post specifically about investing in crypto, so I highly recommend you start with the previous ones if you haven’t read them yet:

(Disclaimer: I’m not an investment advisor, so please don’t see this series as me telling you to invest a certain way. Instead, this is my attempt to thoroughly explain all the major options available to you in the crypto world so you can make your own choices. Many of these will not be right for every person, and I don’t know your individual situation.)

Let’s begin with an update on some of the platforms and tokens I’ve discussed in the last few posts:

I’m still holding my position here. They were the original innovators in the “DeFi 2.0” space, and the team seems to still be doing good work. The whole market is of course down now, but I’m hoping that OHM (the token behind OlympusDAO) will eventually recover well.

This one is tricky, but I decided recently to completely get out of my TOMB and TSHARE investments. A lot of people still believe in Tomb, but it feels harder lately for me to buy into their central thesis that FTM (Fantom) needs an additional token that’s pegged to it. Why not just use FTM itself? In any case, Tomb right now feels like more risk than I want to be taking on, especially in a bear market.

(To be clear though, these aren’t super strong opinions that I’m holding on either OlympusDAO or Tomb Finance. I haven’t done a huge amount of additional research on either of them lately—I’ve simply made a gut decision about each based on a few things I’ve read in the community.)

As usual, because this has been my #1 money-maker in all of crypto, my update here is going to be longer.

On February 8, the StrongBlock team finally released their long-awaited Litepaper (i.e., a shorter version of a traditional whitepaper that explains a crypto project). It lays out their vision for the future of the project.

The community overall seems quite happy with the paper. I’m still not fully convinced, but I do feel better about StrongBlock after reading it—enough so that I decided to compound all of my gains from my recent node rewards claim into additional StrongBlock Ethereum nodes.

I’d suggested in Part 22 that, at that point, it might have been better to create Polygon nodes rather than Ethereum ones (since the former accrued rewards faster and I was worried about the longevity of the project); but, I’ve largely changed my mind since then for two reasons:

Based on the Litepaper and a lot of recent conversations in the community, I’m going to lay out both a bull perspective and a bear perspective for StrongBlock. Then, you’ll have to make your own decision about whether it’s a good investment for you at this point.

My arguments for the bull side (i.e., optimism):

My arguments for the bear side (i.e., pessimism):

On balance, there are solid arguments on both sides, but I am feeling a fair bit better now than I was before the Litepaper was released, so I’m a little more on the bull side at this point (keeping in mind that I’d still call this a high-risk/high-reward opportunity).

At least now there’s a real plan in place so we’re clear on where the team is aiming to head over the next year instead of feeling in the dark; and, StrongChain and STRONGER do feel like pretty legitimate solutions to the sustainability problem. I’m still hoping for more concrete details though in the next AMA.

Beyond StrongBlock, here’s an update on where I’m putting my money in crypto right now:

First, despite the bear market, I’ve been keeping the majority of my crypto holdings in place (other than selling out of Tomb, as I mentioned earlier).

A lot of my riskier plays (e.g., Wonderland, KlimaDAO, Umami, Jade Protocol, Euphoria, etc.) haven’t been doing so well. Like I’ve said many times, especially when it comes to these high-risk/high-reward opportunities, things change very quickly.

In this case, I don’t think I was diligent enough in tracking where the sentiment was heading here and adapting. It seems that the energy in the community moved away from forks of OlympusDAO and Tomb Finance and toward “node” projects.

To be honest, I haven’t investigated many of those too closely since most seem quite scammy to me (for example, Ring Financial turned out to be a rug pull). If you want to get into node projects, StrongBlock seems to me like your best bet.

Overall, I’ve been losing even more of my appetite for high-risk projects. My philosophy lately has been that StrongBlock is going to represent the high-risk portion of my portfolio, and beyond that I’m going to focus almost exclusively on much lower-risk opportunities.

I’ve been doing a lot of research into opportunities focused on stablecoins (specifically, USDC, UST, and DAI) as well as other coins and tokens that feel highly likely to last for a while so that I don’t feel like I have to keep checking to make sure the project is still afloat.

(Remember that these things change quickly, so the APY’s will likely be different by the time you read this.)

A few reminders about all this:

Now, taking a step back from all that, here’s the question I’ve been regularly asking myself for the past six months:

When people ask me for crypto investing advice, the biggest question I wrestle with is:

I certainly don’t have a perfect answer here, but let’s break this down.

First, should we be buying big names like ETH & BTC or other coins and tokens?

I believe that some diversification is always valuable just in case one of the smaller names shoots way up. However, ETH and BTC are still probably much better bets for the majority of your money. Here’s a very deep dive into this subject by Fais Khan. The following quote summarizes what he found in his research: “Most coins underperformed [ETH/BTC], returns got worse over time, and VC-backed [venture capital-backed] coins did worst of all.”

Also, don’t discount Bitcoin. Like many people, I got my start in crypto through Bitcoin; but as I learned more about Ethereum, it began to seem “obvious” to me that Ethereum was the superior cryptocurrency. After all, why would you want simple “digital gold” when you could have an entire multipurpose ecosystem of dapps?

Although I still do own more ETH than BTC, my thinking has evolved here. There’s a reason seasoned investors still hold gold and commodities in addition to stocks. More importantly, Bitcoin is in a class by itself. Yes, Ethereum can “do more” than Bitcoin, but a lot of brilliant people I follow still believe that Bitcoin has a very bright future.

Perhaps counterintuitively, a big reason for that is its simplicity. The original whitepaper is less than 10 pages long, and I’ve heard a lot of computer scientists remark on its elegance. It’s not trying to do too much, and that makes it excellent at what it is trying to do—which is to offer an incredibly-secure digital store of value, with a fixed supply that can never be increased.

Plus, as crypto expert Balaji Srinivasan said, Bitcoin also has the advantage of having a “disappeared founder” (since the original creator of Bitcoin is anonymous and no longer controlling it). One effect of that is BTC can just exist as it is, easily understandable, without any controlling forces changing it.

When Balaji was asked in late 2021 what he would invest in if he could only choose one cryptocurrency, he said Bitcoin.

Next, what about holding ETH/BTC versus yield farming?

I’ve often wondered if it makes more sense to just buy-and-hold major coins or to put my money into a pretty safe farming opportunity like USDC-FTM on SpookySwap that earns an APY of over 70%.

In some ways, this is similar to asking if you should invest in growth stocks or dividend-earning stocks. There are all sorts of opinions out there on that question—some people would say you should own a mix of both.

Like I said, this isn’t an easy answer (other than to say that a mix of both probably makes the most sense here too). But I’ll explain why I don’t think it makes sense to only favor yield farming opportunities and ignore buying-and-holding “blue chip” coins (i.e., the biggest, most stable ones):

Plus, if you believe in the vision for crypto as a foundational part of the future Internet, the “blue chip” cryptos should keep rising, right?

Well, let’s look at three different perspectives it might be reasonable to have on the future of the crypto world:

To be clear, what I’m about to lay out are purely hypotheticals. Just to play devil’s advocate, I’ll argue for each of the three perspectives, even though I personally am somewhere between #2 and #3.

Particularly with the crypto market decline lately, I know it becomes easy to just think of all this as similar to the stock market: You put money in and your investment rises or falls.

It’s easy to lose sight of the potentially world-changing technology being deployed in the crypto space. Here’s a video of a professor explaining “zero-knowledge proofs”—a core technology behind blockchains—in an easy-to-understand way. I personally find tech like that to be beautiful and inspiring.

In other words, this isn’t just another investment opportunity—crypto is a force that has the potential to fundamentally reshape some important aspects of how our society works. It’s already begun doing that, so of course there’s push-back from traditional institutions and growing complexity around regulation. But, despite the ups and downs along the way, I continue to firmly believe in a bright future for crypto.

Bottom line: I think that there’s definitely room for yield farming and other coins/tokens in your crypto portfolio, especially yield farming involving stablecoins. But, it seems to me that the majority of your crypto money should still be in ETH, BTC, and potentially some of the other most promising blockchain coins like SOL, LUNA, FTM, and AVAX.

Next time, I’ll explain some scams I’ve been hearing about, how I’ve dramatically increased my security, tax strategies, and more.

P.S. Crypto is one of my newest passions, but my overarching focus in life is personal growth and intentional living. Do you want help with challenges like confidence, decision-making, or idea overwhelm? I’m a transformation coach who helps analytical thinkers get unstuck, find consistent motivation to take action, and design their life purpose. Read more about me here or my coaching practice here.